All Things New in Concert on August 14

A band of fresh-faced 20-somethings may not be the average person’s most obvious source for life wisdom and spiritual depth, but the risk is worth the reward—at least with All Things New, the surprisingly insightful act just inked to BEC Recordings.

On the surface, singer Garrett Hornbuckle, drummer Luke Wycuff, bassist Joshua Schou, and guitarist Jeff Stein are young and easygoing: two guys met playing junior high baseball together and music runs in several of their families. But dig a little deeper and you’ll find godly men who know too much too soon about broken homes, broken faith, and broken hearts – and on the flipside what it means to be restored, accepted and made new.

Although the members of this worshipful, contemporary, and often folksy Florida quartet could talk about their childhood like it was yesterday—the songs they write and sing on their self-titled debut album already contain the clarity of a hard-won life lesson: things break apart in this world, but God restores them.

“I feel like these are songs that people need right now. They carry the message of redemption and freedom in Christ who came and died for us while we were still sinners,” says Garrett. “All Things New is just so eager to share that hope.”

The origins of All Things New date back to the guys’ mid-teen years as a six-piece outfit born from other Fellowship of Christian Athletes worship bands. Indeed, All Things New is the strong sum of its unique parts. The four young men have experienced different lives but are very much on the same page with this first batch of songs they wrote together. And their stories shine through as they discuss the tracks. Each of the members working full-time day jobs in addition to working on their musical career and ministry, All Things New is dedicated to showing God’s love through their lyrics and songs.

The band’s debut single, “New Man,” is a strong opening statement about how God creates beauty from ashes. Combining heartfelt vocals, muscular musicianship, and a graceful string section, the song grips listeners with a compelling force.

“It doesn’t matter what you or I have been through,” Garret says. “In Christ you are worthy and you are whole.”

A similarly sweet and powerful truth comes through on the band’s second single, “Washed Over Me,” a dulcimer-driven, three-part harmony, foot stomper not far removed from Mumford & Sons.

All Things New released their self-titled debut in 2013 to media and radio praise. The band’s first two singles “New Man” and “Washed Over Me” charted on the National Christian Audience, AC Monitored and Indicator charts. The band also released a special Christmas edition of the self-titled debut in November 2013.

Fans across the country were introduced to All Things New as they toured 30+ dates with Newsboys on their spring “God’s Not Dead Tour” and as well as in the fall with the Rhett Walker Band "Come to the River Tour.” In 2014, concertgoers will be able to hear the band on the Francesca Battistelli and Sanctus Real tour. 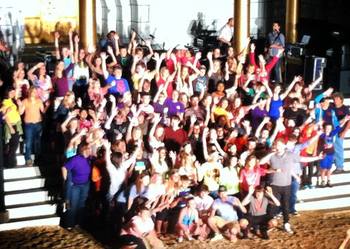