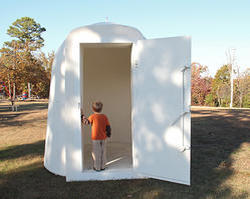 Now, visitors to the Great Passion Play can see what an Israeli bomb shelter looks like. Two missile/tornado shelters have been delivered from Israel to the United States in recent days, one to The Great Passion Play and the other to The Gospel Station Network headquarters in Ada, Okla.

"We are excited to display these shelters for the public to see how southern Israeli families cope with the daily bombings in towns north of Gaza City. It's hard to imagine how they must suffer each day in fear of being hit and in fear for their children," said Randall Christy, founder of the Gospel Station Network and CEO of the Great Passion Play. "The first time I went to that region of Israel, we had to make a mad dash to one of the bomb shelters, as sirens blared. I found out that people in those southern cities drive with their windows down so they can hear the sirens, immediately pull over and jump in a shelter such as this one which are found on most street corners."

Christy talked about how Israeli children play in their yards until sirens go off, then run to the nearest shelter--either in their yard or on the street--and wait until the danger passes, then go back to playing.

"Earl Cox, a dear friend and colleague of mine, who serves as Benjamin Netanyahu's ambassador to the evangelical Christian world, introduced me to the owner of the makers of these shelters, Rabbi Bowman, who donated these shelters to our organization," Christy said.
Cox recently spent a few days in Eureka Springs touring the area and the Great Passion Play. Christy said Cox was amazed at the beauty of the area and the epic play production and fell in love with the Ozarks.

"We will have the shelter at the Passion Play open to the public, with a display of information explaining its use," Christy said. "I think people will be interested in seeing it. They can also be used as tornado shelters due to their extreme weight (22,000 pounds) and their aerodynamic shape. We have placed it by the Berlin Wall display near the Christ of the Ozarks for the public to view."
​
The shelter also will be featured as part of the Behind the Scenes Tour and lunch package being offered this November through April where groups can visit the Passion Play grounds and receive a guided tour through the backstage area, Holy Land, art and Bible museums, Jerusalem Chapel, Berlin Wall, Church in the Grove, Israeli bomb shelter and gift shop and eat a lunch custom-prepared for their group at the Great Hall.