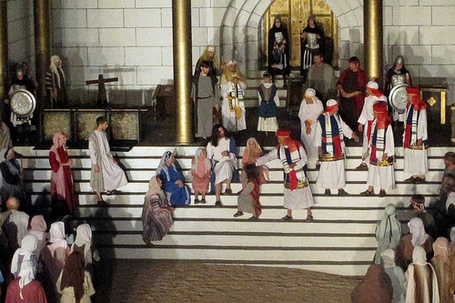 “America’s #1 Attended Outdoor Drama” has just received another distinction as one of USA Today’s “10 Best Outdoor Concert Venues You Shouldn’t Miss.”  The USA Today’s 10Best.com site says, “Performed since 1968 in the beautiful Ozark Mountains in Eureka Springs, Arkansas, the last week of Christ’s life is rendered in a large-scale dramatic production by 170 actors in a multi-level amphitheater setting. The live animals are a nice touch.  Through October.”

“We are honored to be named one of the 10 Best Outdoor Venues by USA Today’s 10Best.com,” said Randall Christy, CEO of the Passion Play.  “The Play is certainly enough to receive the accolades all by itself, but our outdoor concerts this year and last have been very well received.”  In June, the Play hosted Gospel Music concerts which featured such acts as Red Roots, the Freeman’s, the Greenes, the Nelons, and many others.  Christy added, “The beautiful outdoor setting as the sun sets with the beautiful Ozark Mountains and the Christ of the Ozarks in the background simply cannot be beat.”